History of the Camera, Part 1

Intro to the Camera

For incoming interns and new students of corporate film and video, we cover the basics of the camera and answer questions such as “what is progressive scanning?” and “what’s the difference between component and composite video?” and more.

Brief History of the Camera

Cameras were created in the 19th Century by utilizing glass to focus light onto a chemically treated surface.  As technology improved, glass got better and the chemically treated surfaces were improved.  By the early 20th Century, the cameras had become somewhat standardized.    Then motion picture cameras came along.  Same principle- but instead of taking one frame or picture, now a motor was created to speed the chemically treated surface (film) through the housing to enable taking many pictures each second.  This started by hand cranking the film through (resulting in variable speed– notice in those old movies all the action is sped up).  But motors eventually were added which led to a standard of 24 frames per second.  Each image was exposed in it’s entirety, creating a “progressive” order in the images.  And these cameras were all mechanical.

Then television was invented.  Now, images were created electronically, not mechanically.  Since the United States was leading the world in the new technology of television, a group of bureaucrats and engineers sat down (actually mandated by the FCC) to create standards so that everyone who bought a tv could see the same programming.  Up to this point, you had RCA making television signals with 400 or so scan lines across, and Philco making theirs with over 600 scan lines across– the signals weren’t compatible, so the government stepped in.  This group called themselves the National Television System Committee (nice name).

In 1941, this group, with the acronym NTSC created the television standard of 525 scan lines at 30 frames per second.  (Important note: the television would “draw” the odd lines by skipping every other one on it’s way down to the bottom and then go up and fill in the even lines.  It would do this every second, so each pass was called a “field.”  This procedure is referred to as “interlace.”  So technically, the NTSC standard was 60 images a second).

When color was brought into the industry in the 50’s, the NTSC mandated that it must be compatible with everyone’s black and white set.  So the three signals of info that create a color picture had to be composited into one signal.  Thus “composite” was born.  Meanwhile, the rest of the world took what the US had done and improved on it.  The PAL standard was created much closer to the film rate and had 25 frames per second.  The scan lines were an improved 625 lines across.  And when color came around, PAL redid it to keep the three color signals separate or “component.”

And this was the way it stayed for decades.  Watch Camera History part 2 for more (coming soon)! 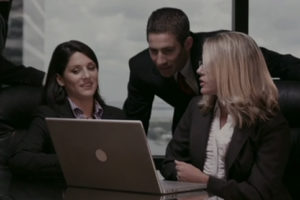 Serendipitous Films is a film and video company offering services from script to screen. We started as a film and video production company (and have produced four feature films as well with actors Lou Diamond Phillips, Sean Patrick Flanery, Adam Baldwin, and Mimi Rogers) and have won over 30 industry awards for our work and consider our greatest accomplishment customer satisfaction. Whether you need a video produced for your company, or you need a camera crew or an editor, we’re ready to help with a great attitude and outstanding ability. Read More